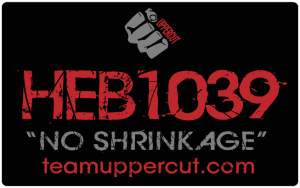 Hebrews 10:39, ” But we do not belong to those who shrink back and are destroyed, but those who have faith and are saved.”

Everything Team Uppercut is about is based upon Hebrews 10:39.  God didn’t create men to shrink back, run for cover or give up when life gets tough.  Men are designed to reflect Jesus’ glory and nature.  That’s what Team Uppercut is all about, throwing life a knockout punch, or not shrinking back when facing life’s toughest challenges.  Those challenges come in many forms and are unique to each of us.  When life tries to destroy us we need to be UNBREAKABLE.  That is what this season of training is all about.  Being a man that is unbreakable. END_OF_DOCUMENT_TOKEN_TO_BE_REPLACED

Running with the End in Mind.

We’ve talked about determining your purpose for running & life in this post: Running for a Purpose.  Purpose helps us determine the ultimate destination.  Goals are the result for each part of that journey.  As a runner you are somewhere along the journey.  Perhaps you’re at the beginning, middle or maybe you’re a seasoned veteran.  Either way, to continue to be a successful runner you will need goals.

Why should you set goals?

I was never a runner.   I hated running.  The closest I ever came to being a runner was during my high school football career.  But even then I only ran as to lay a smack down on some unsuspecting running back.  I could do that all day.  But I have never been interested in running aimlessly.  Until….

One day I was playing with my oldest son Jacob and after about fifteen minutes of chasing him around the yard I thought I was gonna die of exhaustion.  The catch here was he was only seven years old.  CRAP! I thought, if he is only seven now and I’m breathing this heavy, what am I gonna do when he is fifteen?  The next morning I started running.  I ran two miles and thought my face was going to explode off of my head.

It took me a month of face exploding runs before I began to find my feet.  It was during my first four mile run when a runner was birthed in me.  I was nervous.  Could I actually run four miles without stopping?  After a month of running I was sure a four miler would cause cardiac arrest.  I told myself that I would run for one hour straight.  If I completed the four miles in that time then great.  If not, then I would try again. END_OF_DOCUMENT_TOKEN_TO_BE_REPLACED